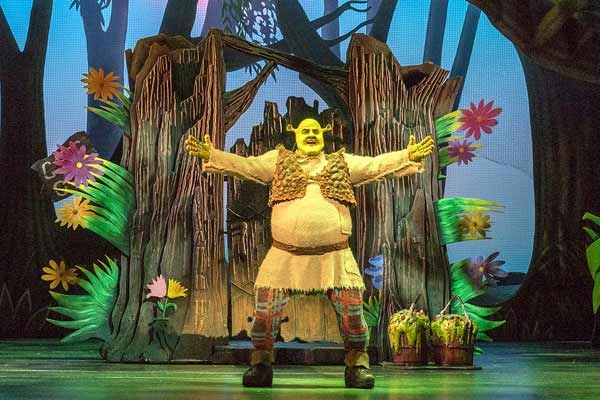 The wait is ogre! Broadway’s monster smash-hit production Shrek The Musical is headed to New Zealand.

Based on the The Academy Award-winning animated film Shrek, the hilarious story of everyone’s favourite ogre will be brought to life on stage at the Kiri Te Kanawa Theatre in Auckland in the April school holidays followed by seasons in Hamilton at Clarence Street Theatre, Christchurch’s iconic Isaac Theatre Royal then Wellington’s St James Theatre.

This lavish multi-million-dollar musical is part romance, part twisted fairytale and all irreverent fun that brings all the beloved characters you know from the film to life on stage and proves there’s more to the story than meets the ears.

In a faraway kingdom turned upside down, things get ugly when an unseemly ogre — not a handsome prince — shows up to rescue a feisty princess. Throw in a donkey who won’t shut up, a bad guy with a short temper, a cookie with attitude, and over a dozen other fairy tale misfits, and you’ve got the kind of mess that calls for a real hero. Luckily, there’s one on hand … and his name is Shrek.

SHREK THE MUSICAL has been enjoyed by audiences around the world since 2008, having toured Australia, the US, UK, Asia, Canada, South America and Scandinavia among others. Now it’s your turn New Zealand.

Shrek The Musical is produced in New Zealand by Showcase Entertainment Group — the same producer who has brought Dr Seuss’s The Cat In The Hat to life on stage as well as produced the regional tour of Madagascar The Musical — in association with Music Theatre International (Australasia) Ltd.

Producer Layton Lillas says ‘All of my productions are designed to be accessible for as many people as possible. I love to see kids being introduced to theatre at a really high level, but I also know being a dad to a 7-year-old that asking them to sit through two and a half hours is just too much.

“Our version of Shrek The Musical features a talented professional cast of 14 actors,” he says, “the set alone is worth over $1 million and was used on both the UK and Australian tours, and a dragon that has its own 40 foot shipping container. Believe me everyone who comes will be blown away!”

Showcase Entertainment Group is producing the TYA (Theatre For Younger Audiences) version of the show, with a running time of approximately 75 minutes.

The show is written and directed to be accessible and fun for the whole family with friendly start times during the day of 10.30am and 2pm, ticket prices ranging from $25 -$65 * and maximum bang for your buck.

The health and safety of our patrons and staff is our priority. Showcase Entertainment Group will be operating to the Ministry of Health Covid-19 guidelines and directives in place during Shrek the Musical. All venues require proof of a vaccine pass for anyone over 12 years of age.